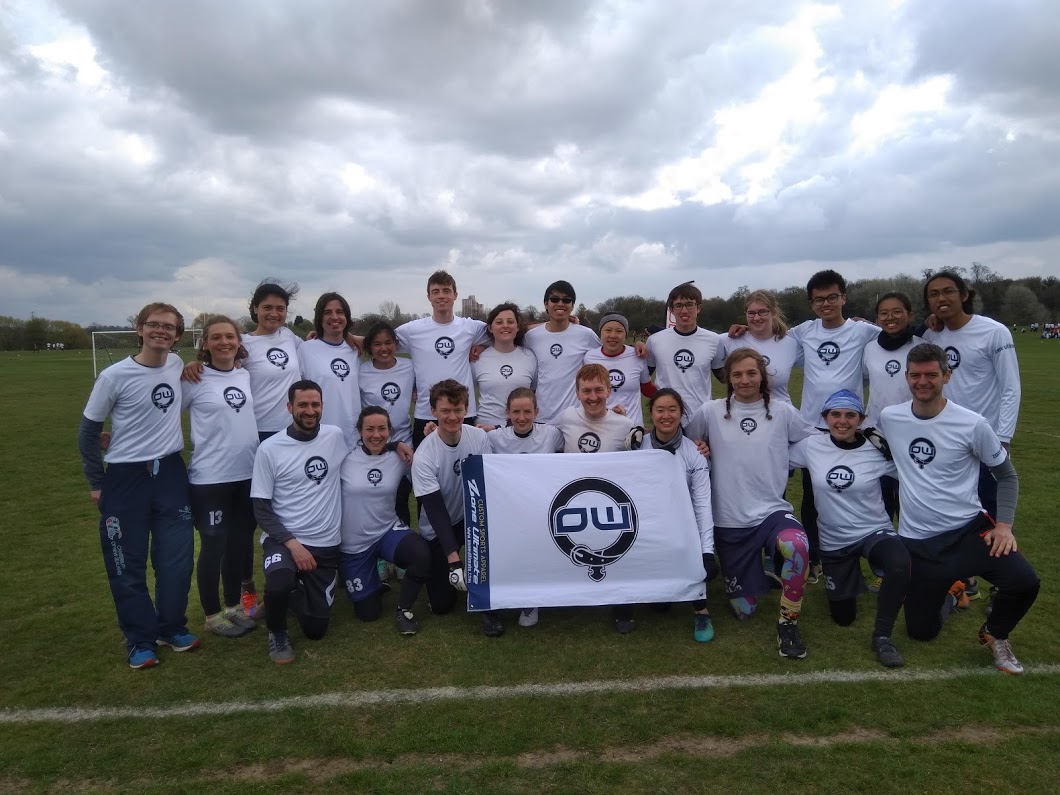 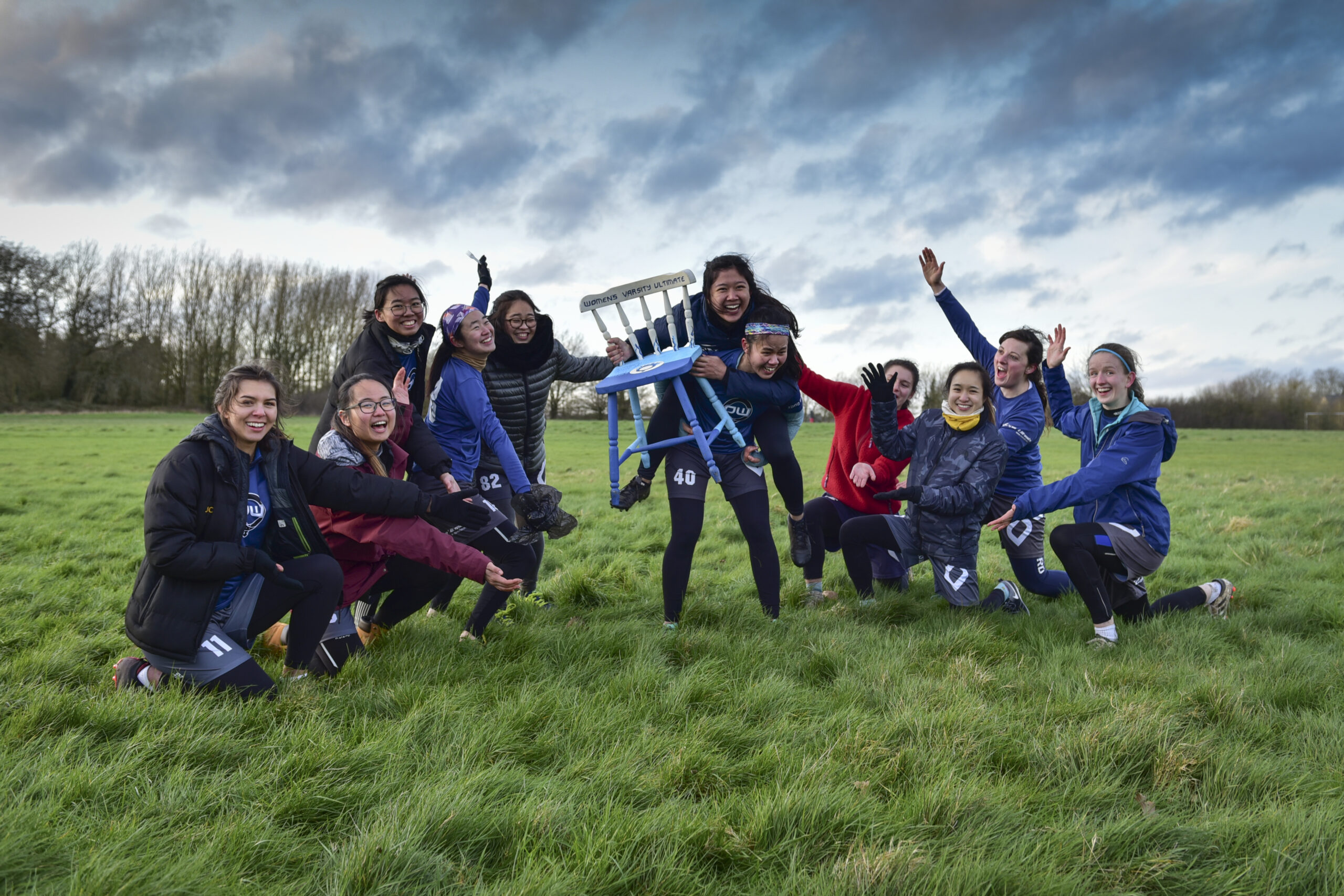 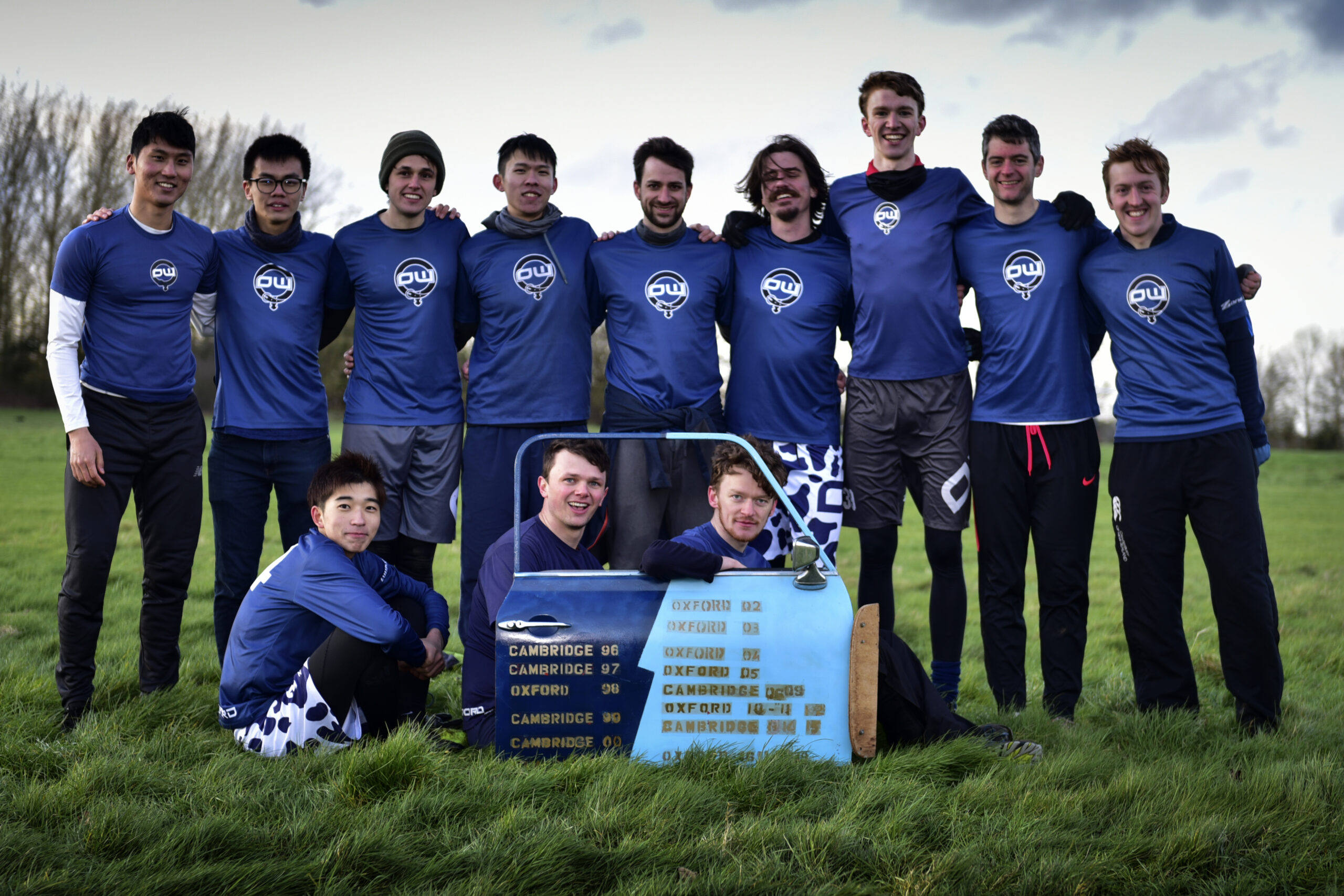 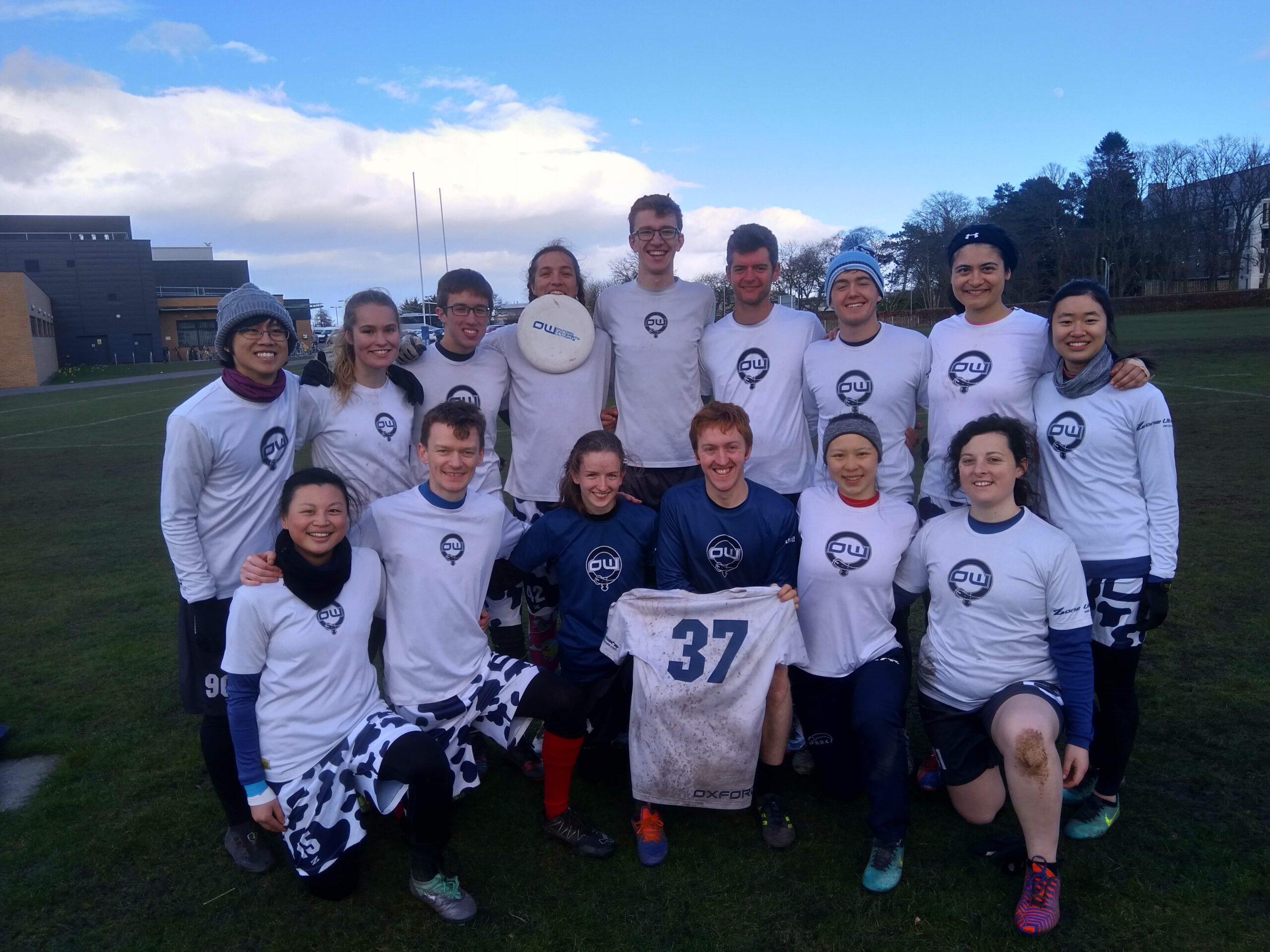 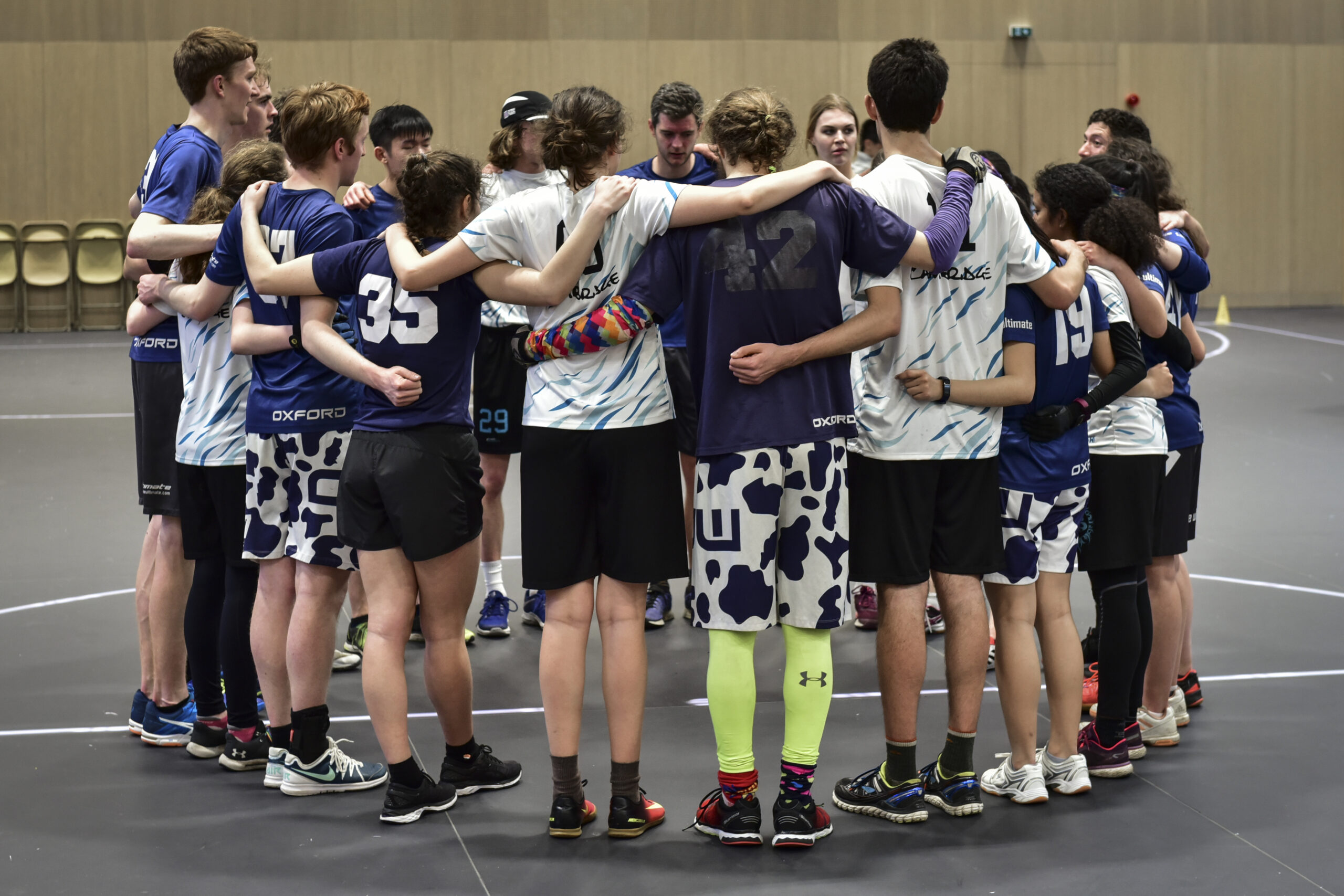 SPIRIT OF THE GAME

Winners of 14 spirit trophies between October 2016 and September 2020

We will be running 2 taster sessions at the start of michaelmas term, which will be completely open to all, no matter your ability:

Please come along if you’re interested in giving frisbee a go, we’re looking forward to seeing you there!

It’s been a while since we’ve updated the website but that doesn’t mean our seasons been quiet, in fact it’s been anything but that. Here’s one big post summarising all of our results and best moments from the 2021-2022 season!

Regionals: Our indoor season this year began as one of the best ever! We managed to qualify all three teams to nationals; womens, mixed and men’s with the men’s team going to division 1!

Nationals: We continued the streak of brilliant results with the women’s team finishing 12th at div 2, beating seed and the men’s team coming an amazing 6th place starting all the way at the bottom as the 20th seed in div 1! Finally we played mixed div 2 were we finished a respectable 10th, just missing out on the top bracket.

BUCS league: Both the men’s and women’s team this year competed in the BUCS league. The men’s team won 4 and lost 3 games and the women qualified for div 2 nationals!

Women’s Nationals: The women continued their form into nationals, braving some very difficult cold weather but persevering and playing some really nice ultimate!

Varsity 2021-2022 was one to remember! We took over 30 players to Cambridge to compete over the weekend in both indoors and outdoors fixtures!

Indoor Varsity: We had multiple teams compete this year at indoor varsity, two men’s teams, two women’s teams and one mixed team. We had some great match ups with the Cambridge, with the women’s second winning their match, the women’s first playing a tightly contested game and the men’s first losing on universe.

Outdoor varsity: We had four teams compete at outdoor varsity, two men’s teams, one women’s and one mixed team. The women’s team opened up the fixtures with a close game against the Cambridge women. The men then player after, with the seconds winning their match and the men’s first sadly again losing an epic game on universe. Finally we finished with the mixed were team put up a good fight but unfortunately lost.

Congratulations to Cambridge, they were incredible and got the better of us in some close fought games. Next year the fixtures will be in Oxford and we will be ready to reclaim our trophies!

Logo: We updated our logo this year, it’s a just a slightly modern take on the current logo! We had multiple designs which went to a club vote and this is the final design!

Stash: We also managed to get new kit this year thanks to the hard work of our stash officer Kate. They had to deal with some fairly troublesome shipping issues due to Covid but the kit made it’s way to Oxford and we are excited to rep it next year!

In UK Ultimate there is large club scene and fortunately in Oxford, along side OW! there is a a local club team; Oxford Ultimate. Many of our players simultaneously play for both, representing Oxford in indoor and outdoor tournaments, both at regional and national level!

If you want to get involved in ultimate this upcoming year, make sure to join our Facebook group and give our Instagram a follow! Trainings will be restarting typically around late September as people return to Oxford for term.

If you are around in Oxford over summer and want to play ultimate, then feel free to join the Oxford Ultimate page and come to the club trainings which happen year round (the coaching is very good). The club is very happy to have new players/beginners come to training so by all means please join the group.

As we’ve mentioned our club has never been bigger but it’s also never been busier. We have our weekly club outdoor trainings where we’ve played some high quality ultimate despite the rough weather in Oxford

The great news is November is only going to get busier with lots of ultimate, tournaments and socials. We look forward to seeing you all

We are currently midway through freshers week with lot’s of frisbee upcoming. In the following month we have,

We also have club socials planned weekly throughout Michaelmas term, see the term card provided by our amazing social secs Matt and Seren.

Congratulations OW for a great performance at “not” uni mixed nationals. We finished 11th having started the day seeded 20th which is amazing jump up the ranks.

We’d like to give special mention to our alumni who played this weekend. You’ve been a massive part of our club (some longer than others

) and are leaving us now with some great memories, not least this weekend. So from OW, a big thank you to

Can’t wait to see you all beat Cambridge again at alumni varsity!

We’d also like to give a special mention to Alistair White-Horne, Jia Jhing, Mahati Garimella, for absolutely smashing it this weekend! Well played

We’ve all missed playing competitive ultimate and the team spirit from spending a weekend together. We can all agree that finally getting back to playing a tournament felt amazing. Thank you to everyone involved and we look forward to seeing you again at preseason.

As we prepare for the upcoming season, we’d like to begin by introducing the committee for the 2021-2022 season.

We have a huge season of ultimate planned and upcoming. See you soon for pre-season 😉

OW will be returning to play in Michaelmas 2020. We are in the process of finalising our return to play plans with the Oxford sports federation to unsure that it is a safe return to ultimate.

All the details about taster sessions and training times will be posted as soon as they are ready. Please join our mailing list or facebook group to be kept up to date.

If you have any questions feel free to contact the President or for COVID-19 specific questions you can contact the our COIVD officer also.

We have two ultimate frisbee taster sessions at the start of Michaelmas term. These are open to anyone who wants to try ultimate frisbee for the first time! Anyone is welcome, please come along!

For more information on our training schedule over the year, see the training page.

We held our annual general meeting and dinner on the 10th May. It was a super fun night, where we also discussed some motions and elected a new club committee, as well as awarded half-blues, colours and awards.

In addition, the following non-committee roles that were elected:

Congratulations to the following players for receiving Half Blues:

And the recipients of First Team Colours:

As always, following the AGM we presented the end of year awards. Congratulations to the winners:

A big thanks to everyone for a great year of ultimate! Thank you for coming to trainings regardless of the weather or time of day, bringing your all and making it so much fun. It’s been fantastic to see the growth in everyone’s skills and confidence over the year. We wish the best of luck to anyone who’s leaving Oxford this summer (you’re always welcome back), and for the rest of you: see you on the pitch next year! 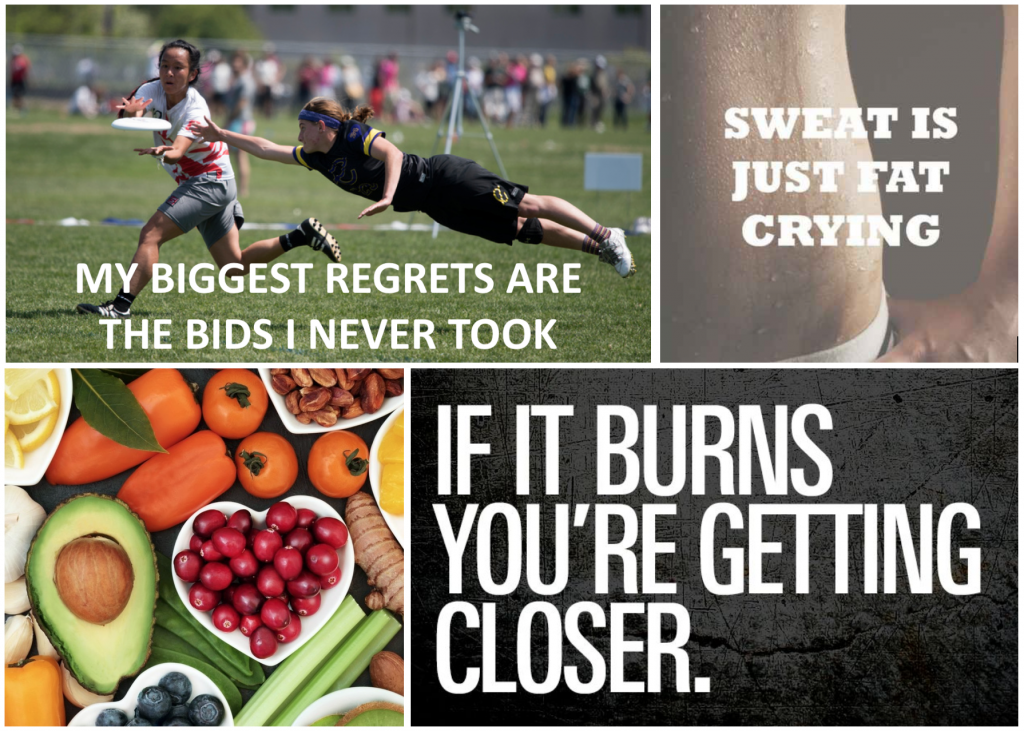 “Just playing ultimate is not enough. To really improve your game, you need to build your strength, core and flexibility off of the pitch.”

OW! will soon start training for another epic year of ultimate. We have some big goals ahead of us: Indoors, Mixed Outdoors, BUCS and more.

We all know it. Fitness is important for playing ultimate.

Whether it means hitting the gym or training in the park, this pre-season fitness guide should give you some prompts and top tips on how to raise your game before and during the 2018/19 OW! season, by doing some ultimate-specific fitness training.

First up, strength and flexibility. Both are important for ultimate. The static exercises below are great for ultimate. Type them into YouTube if you’re not sure what they are.

Second, endurance and agility. Better ultimate players work on both of these. The majority of the exercises below don’t need any equipment: the park is the best place to try them!

READ WHAT BEAU KITTERAGE DOES EVERY DAY HERE

READ THIS GUIDE FOR TRAINING FOR ULTIMATE

HOW OFTEN SHOULD I WORKOUT?

Pick a few of the exercises above (not all of them!) and try a workout!

If you’re just beginning and are not sure what to do, here’s two example weeks to try:

“Prevention of injuries is key. By working out, you reduce your chance of injury.”

Being able to manage injury well is critical for your long-term ultimate career. We want minimal injuries over the 2018/19 OW! season. Below are some top tips on how to prevent and cope with injury.

Working out for ultimate lowers your risk of injury.

5 TOP TIPS FOR COMING BACK AFTER AN INJURY 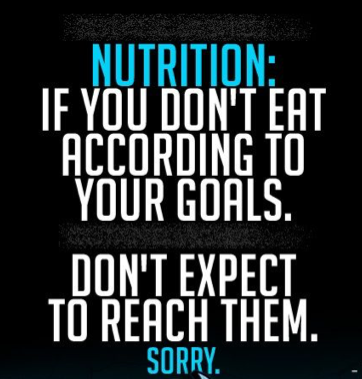 A good diet is vital when playing any sport.

Many ultimate players don’t realise how much fuel their bodies need to keep up with the sport.

YOU CAN RUN ON AVERAGE 4KM PER GAME OF ULTIMATE..

Are you eating enough for ultimate?

A three hour OW! training session or a 40 min workout could easily burn 600+ calories. Make sure your body is able to cope!

Have a read of this article on nutrition for ultimate.